The 2017 Worldwide Blood Drive is the 686th of the World Mission Society Church of God of giving “Life Through the Love of the Passover”. Conducted “in Celebration of Winning the Queen’s Award for Voluntary Service” with the cooperation of the Lung Center of the Philippines and the Philippine Blood Center on March 16, 2017 from 10AM to 4PM at the Lung Center main lobby. 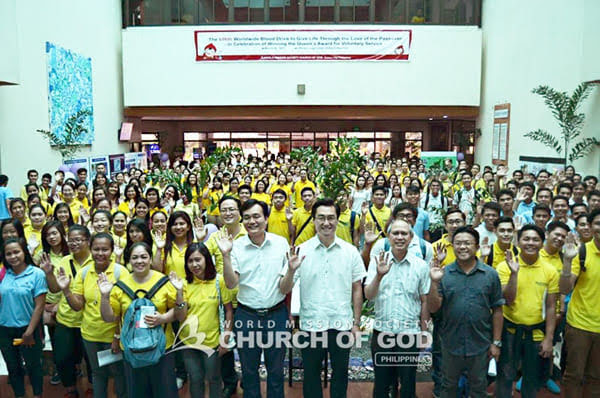 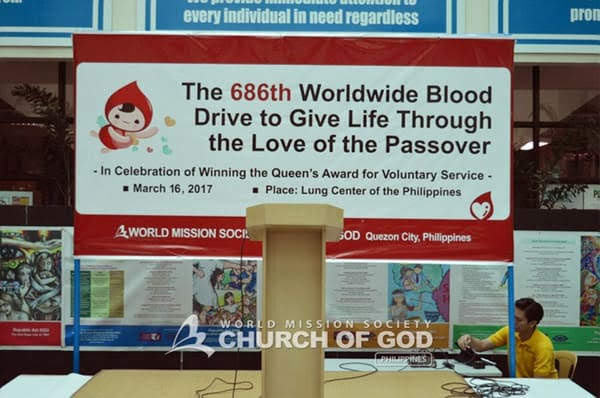 In most blood drive campaigns the LCP holds, 50 to 100 blood bags is deemed a success. However, more than 400 participants in this mass blood donation generated 236 pints of blood. This made the event the most successful drive held at the hospital.

Special guests attended this event. There came the Executive Director of the Lung Center of the Philippines, Dr. Vincent M. Balanag Jr., to give some opening remarks. Councilor Erwin Romero under Committee on Health also came to show support from Barangay Quirino 2C District 3. And Mr. Vladimir Estocado, in charge of Volunteer’s Desk, delivered message from the office of Mayor Herbert Bautista.

“Actually the WMSCOG is one of the most active organization [among] almost 1800 NGOs, peoples organizations, volunteer groups and foundations recognized by the Quezon City Government as partner for the development. We would like to congratulate the WMSCOG for winning the most prestigious Queens Award for Voluntary Service. The Philippines also has a Search for Outstanding Volunteer Award. As for the Quezon City Government, we have the Local Outstanding Volunteer Award. We always nominate your organization to be recipient of [that] award.”
-Mr. Vladimir Estocado, representative of QC Mayor Herbert Bautista

The event commenced with a prayer led by Pastor Choi Jeongmaan, Overseer of the Church of God Philippines. Followed by a greeting of blessing with one saying to another, “God bless you!” Afterwards, Pastor Choi shared about the event’s purpose: to share the love of Elohim and of the Passover as well.

When the short opening program has finished, marshals went to their posts and guided the participants at every step. This resulted in a fast and orderly flow. First, the Registration, where participants sign up and get their forms. Then, to see if they can be a donor, they proceed to the Assessment. From their weight to their medical history to their hemoglobin test results; it is decided whether they can donate or not. Those who passed the examination and donated blood were given a necklace of shiny candies. In addition, the Lung Center gave them a hand towel and some snacks to restore their energy. Meanwhile, the effort and courage of those who came but were not able to donate did not go unappreciated. They packaged candies as well as a consolation notes that cheered them up and brought smiles to their faces.

There were so many members that the Lung Center Team had to coordinate with the Philippine Blood Center. They divided the Participants into two groups and led them to the second floor where they resumed the event. Throughout all these, members waited patiently with a smile. The love that the members radiated attributed to the event’s light atmosphere. 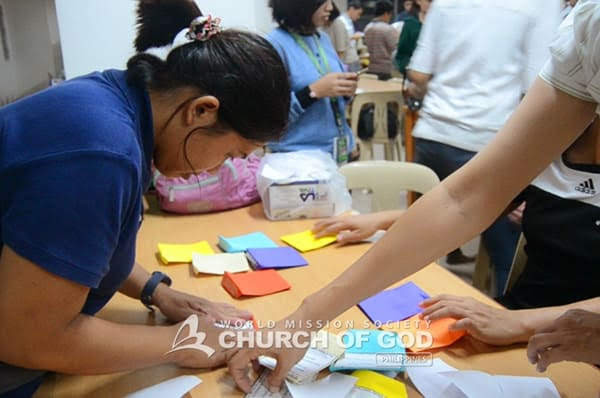 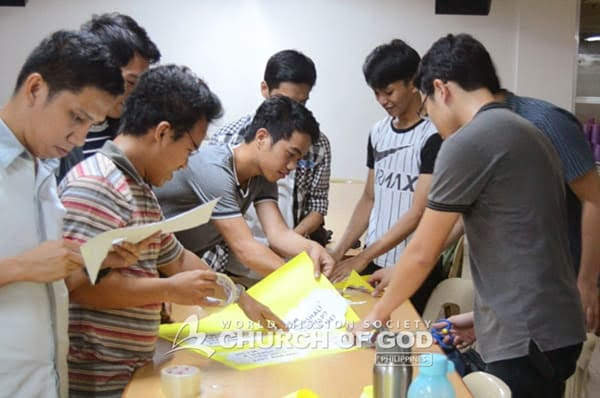 “We receive the promise of eternal life from God through His blood, in the same way, we receive physical life through blood. That’s why we continually conduct blood drives in order to share life and the love of God.” -Pastor Choi Jeongmaan, Overseer of the Church of God Philippines

The church aims to give a hand to neighbors who are suffering from illnesses or disasters, promote the value of one’s blood, and benefits in donating blood. Above all, the Church of God would like to inform people about the most important Blood of Christ that will give us Eternal Life and salvation through the celebration of the Feast of Life, the Passover of the New Covenant.

The 2017 Worldwide Blood Drive is a relay blood drive conducted in all 2,500 Churches of God in 175 countries throughout the world. It is held simultaneously in major cities including South Korea, United States, UK, France, Mongolia, Singapore, Peru, Africa, along with many other countries around the world. In the Philippines Churches of God, the blood drives took place in Quezon City, Baguio, Davao, Laoag, Cebu, and also in many other cities and provinces.

By the grace of God Elohim we glorify the name of our Heavenly Mother Jerusalem she is our savior and give the eternal life throught the passover.

Amen po! Truly, the glory of God Elohim is being spread throughout the world according to the prophecy of the bible. Thanks to Father and Mother po! ^^

Amazing event given by our Heavenly Father and Heavenly Mother. We can receive eternal life through their flesh and blood by celebrating the Passover of the New Covenant. Thanks to God Elohim for their boundless love to mankind.

WMSCOG blood drive is so beautiful activity to donate blood for people’s life.

That’s right 100%. We also need to get God’s blood thru Passover.

WMSCOG members always try to practice Mother’s Teachings by sharing and transferring the love of God. Blood Drive world wide is one of them. Thankful and proud to be a member of WMSCOG. Always animo !!

It’s a wonderful activity for giving life trough blood donation. Heavenly Mother gives us eternal life through the Passover of the new covenant.

People cannot live without the blood. Like this, Christ give us the new covenant with His blood.

That’s right!
These who practice God’s teaching are those who reveal the glory of God.
It’s proud!

As God Elohim give us love thru the Passover by shedding , We share God’s love by donating blood 😀

Their passionate and bright appearance is so beautiful. I’m always cheering.

It is great results!

Saving people by sacrificing is hard but meaningful and wonderful!

By the Grace of our Heavenly Father and Mother, such a beautiful website just like my brothers and sisters in zion all over the world 🙂 <3 <3 ANIMO!!

I’m sure that Elohim God, Father and Mother, are very pleased with you all WMSCOG Filipino members because you always do your effort to follow Their examples and teachings. Sending love and cheer to all of you. 😀

Thanks to Christ Ahnsahnghong who gave us the forgiveness of sin and eternal life thru the great sacrifice of Your precious blood.

Church of God members do which is God’s love.

Nowadays, It’s hard to see that many people donate their own blood without any rewards. In that sense, WMSCOG’s event is so nice to the society and they really do the pure function of religión.

Thanks to the great works of WMSCOG to save people around them. I hope people will also keep the Passover, the way to eternal life:)

Through the blood drive, we can share the love of God who shed Their precious blood for our salvation. Thanks to Elohim God!

WMSCOG is really wonderful. I saw this good church first time. I can realize that God’s love makes us good person. We love u. Mother will be pleased from these activities. Thanks to God.

It seems a love relay for the whole world.
This church is worthy to be praised.
You did a good job

Today, noble love of God the Mother is spreading to all over the world.
Thanks to our spiritual parents, God the Father and God the Mother to give the eternal life.♥

I realized that donating blood is a beautiful thing that i can save other ppl’s lives, thanks to the Church of God!

Wow~ lovely people~:-)
An ounce of practice is worth a pound of theory.

Blood donation events can save a lot of lives, I do’t think that is easy to put it into practice.
The way I practice true love of Christ is so touching. I would like to participate in the blood donation event.