ASEZ, the University Student Volunteer Group of the World Mission Society Church of God, volunteered to clean up the streets of Caloocan. Around 150 university students from Caloocan, Malabon, and Valenzuela gathered for the “Mother’s Street” Cleanup on January 27, 2019. These included the University of Caloocan City, City of Malabon University, Our Lady of Fatima University – Valenzuela, and Pamantasan ng Lungsod ng Valenzuela. With a bright smile on their faces, students volunteered with determination.

In addition, Caloocan policemen sent by SSupt. Restituto Arcangel managed the road block for the clean up. The Caloocan City Government provided cleaning materials, with approval from Mayor Oscar Malapitan and assistance from Hilario Castro of the Department of Public Safety and Traffic Management.

More volunteers had arrived than expected at the “Mother’s Street” event. Participants formed four groups to clean Barangays 135, 136, 137, and 140 in Caloocan. Holding garbage bags and walis tingting, the volunteers dived into many places of these barangays.

Plastic bottles, soda cans, biodegradable waste, pieces of Styrofoam, and even big tree branches soon piled up. Volunteers did not mind their sweat-soaked uniforms and even entered tight canals to pick out accumulated garbage. They ultimately gathered enough trash to fill 3 garbage trucks.

Councilor Nubla only had words of praise for the volunteers. “I am inspired with these students. It is even the young bloods who are ready to inspire the leaders of the government and the local communities,” she said. After watching the students in action, she expressed her gratitude, saying, “You are a group that keeps your words.”

The volunteers themselves felt a sense of mission during the “Mother’s Street” cleanup in Caloocan. One officer from the ASEZ said, “I think good deeds have the power to move the world, regardless of different generations. We have come here today to help change and develop our community. I hope that this activity will not just be a one-time event but continue to be done, so we can take care of the hygiene and health of the residents. So, I want this event to be a good opportunity for the residents to cultivate environmental awareness.”

Florence Recla, a 4th year student at the University of Caloocan City, said, “I am proud of ASEZ because through this group, we as students are able to give an impact to the society we live in.” Alexis Tolentin, also a 4th Year student at UCC, added, “This group is solely consisted of University Students, and instead of spending too much time in social media and get addicted to internet, I am so happy to join events like this. It makes me feel healthy and fulfilling.”

From Caloocan to the Rest of the World

The name “ASEZ” means “Save the Earth from A to Z.” ASEZ carries out the SAVE Movement to share the love of God the Father and God the Mother with neighbors in need throughout the global village. It especially lends a hand to people who suffer due to climate change, environmental pollution, and many other disasters. “SAVE” stands for Social Service, Awareness Raising, Victim Relief, and Environmental Protection. As part of the Movement, ASEZ conducts “Mother’s Street” cleanups, global forums on the implementation of the UN SDGs, talk concerts to cope with climate change, and many other activities.

The United Nations and many other countries are also supporting their altruistic activities. Previously, ASEZ members delivered a message during the International Day for Tolerance 2018, co-hosted by the UN and YouTube. ASEZ also received Green Apple Awards for Environmental Best Practice on November 12, 2018 at the Palace of Westminster. In August, selected ASEZ members joined Brazil’s National Volunteer Day as honored guests and received praise from President Michel Temer. Over 54,000 people from all walks of life, including former UN Secretary-General Ban Ki-moon, Nobel Laureate Robert Huber, Global Green Growth Institute Director-General Frank Rijsberman, and Peruvian First Lady Maribel Diaz Cabello, have signed MoUs and similar documents in a show of support. 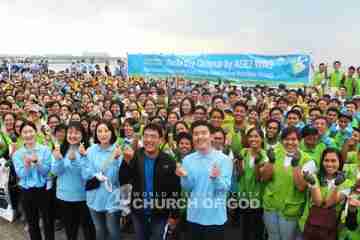 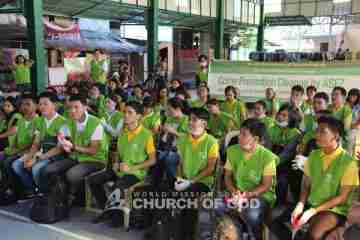 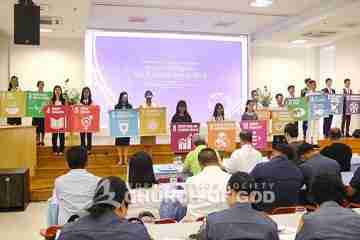 The ASEZ Global Forum 2018 took place on December 9 in the 1st Quezon City branch of the World Mission Society Church of God (WMSCOG). The Reduce Crime Together project took center stage in this Read more…